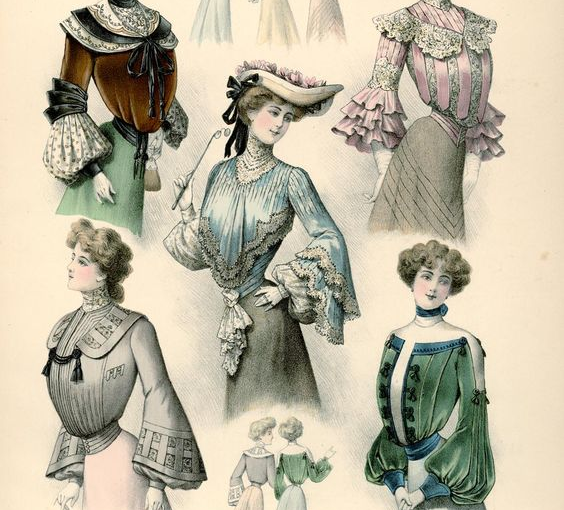 I gain so much insight into the customs and styles of the American Edwardian era when I read the popular fiction of the time. I especially enjoy the short stories in popular magazines. They were written to be a short read, created with a predictable story arc and sprinkled with little details about food, pastimes, and especially clothing.

Where do I find these stories? I have a large collection of women’s fashion magazines, focused on the years between the 1890s and the 1920s. I started collecting them for the beautiful pictures; I continue to revisit them for the context they give me into daily life. I find another source of these short stories in compilations. The Complete Works of O. Henry is a great book to read for pleasure and historical insight. Akin to Anne, a little paperback from Bantam Books (edited by Rea Wilmshurst) is another.

Originally published in The Designer, March 1904

“Penelope’s Party Waist” is a sweet story of two sisters, Penelope and Doris Hunter, who are orphaned and making their way in the world alone. They own the tiny cottage that they live in, but  otherwise, their poverty keeps them from pursuing their wishes: music lessons for Penelope and being able to stay home and “keep house” for Doris. Penelope is seventeen and works hard at her studies. Doris supports them both with a small income from her job as a “typewriter” in an uptown office.

When Penelope gets an invitation to a friend’s party, she thinks she can’t go because she doesn’t have “a suitable dress to wear”. Doris suggest that “If your black skirt were sponged and pressed and re-hung, it would do very well.” However, there is still the problem of a blouse (a “waist”) to wear with it. They have no money for even a small bit of silk fabric to make a new waist. So, they sigh and make the best of it, giving up the idea of the party.

The very next day a package arrives! (I love how these coincidences occur just in time to advance the story line.) A letter has arrived, too, explaining what is in the package. Sadly, it is not a party dress, but an old quilt from Aunt Adella. She has closed up her household to move West, where she will live with her son. She is disposing of the quilt that Grandmother Hunter had made long ago. Doris recognizes the pattern; she thinks it is called “Little Thousands”. Neither girl is especially impressed by the quilt’s appearance; it is faded and old-fashioned.

Note: A brief internet search didn’t turn up a “Little Thousands” quilt pattern, but here is an example of a quilt called Thousand Pyramids, made about 1890.  It’s from this blog: http://quiltstudy.blogspot.com/2016/01/10000-pyramids-of-past-and-present.html. This gives us an idea of what the family heirloom may have looked like.

However, the back of the quilt is beautiful!

‘“Why, the wrong side is ever so much prettier than the right!” exclaimed Penelope. “What lovely, old-timey stuff! And not a bit faded.”

The lining was certainly very pretty. It was a soft, creamy yellow silk, with a design of brocaded pink rosebuds all over it.

“That was a dress Grandmother Hunter had when she was a girl,” said Doris absently. “I remember hearing Aunt Adella speak of it. When it became old-fashioned, Grandmother used it to line her quilt. I declare, it is as good as new.”

Doris’s thoughts start to work on how to use that pretty fabric to help her sister go to the party.

“It would make the loveliest party waist,” she said under her breath.” Creamy yellow is Penelope’s colour and I could use that bit of old black lace and those knots of velvet ribbon that I have to trim it. I wonder if Grandmother Hunter’s reproachful spirit will forever haunt me if I do it.”’

That silk fabric from “long ago” (perhaps the 1850s) might have looked something like one of these floral patterns.

‘In the three following evenings Doris made the waist. She thought it a wonderful bit of good luck that Penelope went out each evening to study some especially difficult problems with a school chum.

Penelope was surprised as much as the tender, sisterly heart could wish when Doris flashed out upon her triumphantly on the evening of the party with the black skirt nicely pressed and re-hung, and the prettiest waist imaginable — a waist that was a positive “creation” of dainty rose-besprinkled silk, with a girdle and knots of black velvet.’

The story tells us how Penelope went to the party and was admired by all the girls there. She also met a sweet, white haired old lady, a Mrs. Fairweather, who was most interested the lovely fabric. Mrs. Fairweather reveals that she and her half-sister each had a dress of that very fabric, long ago, before their mother died and they moved apart. Over the years they had lost touch with each other. Mrs. Fairweather was widowed, and her only granddaughter had died. She was alone in the word. And, of course, during the conversation we discover that Penelope’s grandmother was the long-lost half-sister, and the fabric was from that long-ago dress! The girls and their great-aunt are all thrilled to find each other and make plans to live together. They will be able to escape their poverty, find a family connection, and follow their dreams.

As a student of cultural and fashion history, I am so pleased with this little story.